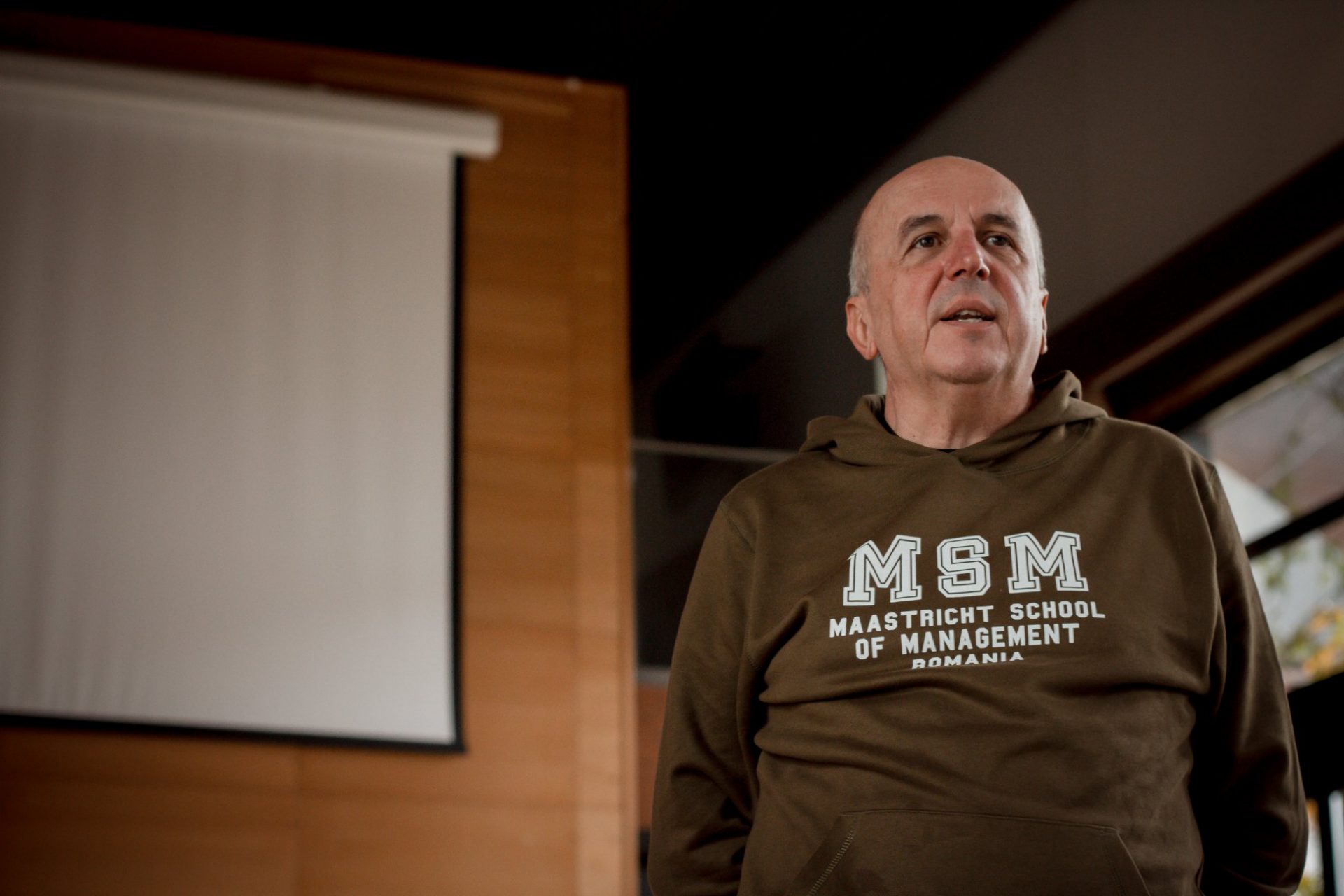 The current time has made us more focused on values – both personal and professional. We had enough time to (re)think what matters for us, what do we prioritise and what do we focus on.

As we know, values are an important part of the business world too. Company culture is built on the interaction within teams, on the common values they share and the objective they’re looking to achieve. Nowadays, the task of a leader is to lead people, not processes, as it happened in the industrial ear. The information era calls for more focus on the soft side.

In a discussion on morals, values and how these impact the company’s performance, the one who has the most inspiring ideas has always been for me Adrian Stanciu. He teaches Leadership and Organizational Behavior, Managing Cultural Diversity and Leading people and organizations at our Executive MBA and Fast Track programs and we managed to have a quick chat with him about rediscovering morality and ethics, the values that make people collaborate and how to put it all in the organisational context.

You’ve worked for the government, for yourself, as an entrepreneur and for big companies. Which one did you like most and why?

For myself. But just because I’m lazy, I’m not saying it’s something people should pursue. I privilege freedom against everything else in my life and every time I built something that became big, it stopped my project. It’s not a good thing, it’s one of my major weaknesses. I can’t build anything big by myself.

I know people who have this dream of building something big and they pursue it, some manage it and I envy their stamina and grit because it is something I completely lack.

One good example is Sergiu Negut and his partner, Teodor Blidarus, because they had a vision and they committed to it and look what they’ve achieved. I was not prepared to put in the effort or sacrifice for that.

During the MBA courses, you talk about values and morals. Do you think there is a correlation between values and performance in companies? Do companies need specific values to perform well and which are those values that they need?

This is a very long answer, I’ll try to keep it short. Traditionally, this wasn’t the case. The industrial model was based on efficiency and it was so successful because it pretty much invented efficiency.

Frederick Taylor, in the 1800s at the International Exhibition in Paris, was showcasing a workshop that had productivity 20 times bigger than other rival workshops. His methods were simple – they were about specialization and industrial process management – you specialise in a very narrow task and then you do that very well and the process is well managed so waste is eliminated as much as possible.

With the advent of machinery and then later on with automation this has increased productivity yet again by orders of magnitude. This has generated enormous wealth and has changed the word. It is what took billions of people out of poverty.

The industrial model is very simple: you have a head who can be a person or a group of persons and a body that executes. The body can have some initiatives, like when you put your hand on a burning stove, the body reacts before the mind.

By and large the system rules and the whole management is based on deviation from the standard, but the assumption is that the plan is correct and that the environment is static enough that you can predict and plan in a certain time horizon. In these assumptions, the model is true.

The problem is that we live in the age of information and that generated a huge change of pace. Typically organizations were building barriers to entry with capital, patterns and all sort of instruments, but now increasingly, these barriers don’t matter so much and barriers to the dissemination of information are very low.

To put it all in a nutshell, the environment stopped being predictable. If you want to build a company that is flexible, you need to have less rules. But if you do that, how do you make it that people make the right decisions, so that you get flexibility and not chaos? Chaos destroys values, flexibility adds value, but it requires a certain amount of discipline.

What common understanding of the good means also has two big components:

This second part is what values are about and this was not invented in the corporate world, we have them in our personal lives. And we had them for the same reason: we had them to cooperate with others, to build something with others. We’ve done this for 200,000 years, we know this, we mastered it very well.

But the industrial model threw this out of the window: we don’t care who you are, just follow the rules. Now we’re going back to rediscover morality and ethics and the values that make people collaborate, to speak about personal motivation, how different people view the world and all that. We do this in our personal lives, but it was ignored in the organizational environment.

What about leaders? What are the soft skills that they absolutely need in order to lead great teams?

Leaders lead because people believe in them. If you look at it from a systemic perspective there are 2 classes of qualities that a leader needs to have: one of them is the ability to envision a future, the other being building the moral good.

In industrial management, the system provides the energy, you are a piece of the mechanism and the system pushes you because it assumes that you will do nothing if left to your own devices. Leadership is based on the assumption that people want to be good and your job as a leader is to nurture this need and remove obstacles and to align energies in a common direction.

As I said before, there are 2 classes of qualities:

There are many values connected to the common good, but if I single out one of them, that would be authenticity.

To sum up, the number 1 role of a leader is defending the common good. Promoting it, emphasising it, speaking about the mission and the values, thinking on the long run, not just what you do tomorrow.

At BISM we talk about change agents. How do you see the definition of a change agent and what is their purpose in the Romanian community?

We speak about change agents because this is something we can contribute to, but frankly, change agents don’t really work in organizations. Not in the sense that you recruit some people that are more open to change, it doesn’t work this way.

Systemic change in organizations requires systemic approaches, it can’t be done from the fringes. In societies, it’s a little bit different, because societies are not so hierarchically structured as organisations are. In critical moments some people can get a lot of visibility and influence and they will become major changes agents.

Just because the society waited for that moment to happen and that person comes and embodies this need, such as Martin Luther King was in the US with the Civil Rights Movement. In many organizations however, you will find CEOs who drive change.

Organizations are hierarchical and they need this influx of power from the top to change. At the same time, once the change process has started, change will not happen uniformly. There will be different rates of adoption and those that are ready to adopt early, who are restless, like to move and to see things done in different ways, these are the people that we call change agents.

They can be role models for others. In a systemic change there is a critical mass of people that you have to win over for the change to happen and this is called the early majority. The early majority are people who are prepared to be convinced and somebody needs to convince them and these are the change agents.

They are the ones that are critical to bring over the early majority and once they’re on board, the change pretty much goes by itself, because now there are enough people on the change side.

You are a consultant for businesses and have a hobby of going on boats for weeks. And yet you’re at the school at least once every other month to spend time with our Fast Track Management Program and EMBA students. What determines you to teach?

I should say I have a passion for teaching. Maybe passion is too big of a word, maybe more a secret pleasure. I derive a lot of satisfaction when I can be instrumental in other people’s growth. It makes me feel good, though I’m not waiting for their gratitude, it doesn’t matter if they recognize it or not.

Of course I appreciate it, when someone gives me this feedback that I helped their growth, but I don’t do it for the feedback. We have this privilege here that we don’t have a one day program – the Executive MBA takes 2 years to complete and the Fast Track Management Program 4 months. During this time, we see people grow, it’s not just a one off, it’s a continuous process you get to experience. You feel the impact that you have in their life and this is very rewarding for me.

For me, this is the most rewarding activity.

Why do leaders go to school when there is so much information already available online? Why spend a weekend in class when you could watch a 1 hour video instead or read an article on HBR?

There is this question: are leaders born or made? The answer is both: some are born and lucky for them. They can probably still benefit from a leadership course. For the rest of us, leadership is an acquired skill and it requires information in action. It requires putting things to work.  In our courses, you meet other people, you have conversations with your colleagues and the teachers. You’re not passively taking a class, that is not our style. We have many conversations and that allows you to put all this information from the perspective of your life and your reality.

You start to understand your own situation in a different light. You get to try new things and come back to ask for feedback or help when you encounter some obstacles. That’s the value that you get from face to face learning and that’s why we’re advocates for face to face learning.

There’s a lot that you can do with online, but this type of interaction is hard to replicate online, especially with the technology we have at the moment. Because of that serendipity that happens both in class, while talking to others, but also outside class, in a discussion during breaks or after the course, through informal networking.

To me, the biggest threat and the biggest loss from this push to virtual interactions that the pandemic brought is the loss of serendipity. I think it plays a big role in the way we function in groups and we don’t realise it until we lose it.

Adrian Stanciu is Founding Partner and Associate Dean – Knowledge & Leadership at Bucharest International School of Management and lecturer in our Executive MBA (starting every year in November) and Fast Track Management Program (with intakes twice every year – Spring and Autumn). You can also explore more ideas from Adrian’s blog – adrianstanciu.ro.